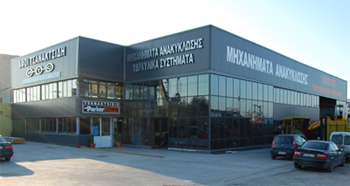 K. TSANAKTSIDIS BROS Co was founded on 27th March 2000. The three founders of the company, Christos, Theodoros and Vasilis are the sons of Konstantinos Tsanaktsidis, the founder of “THE 9 BROTHERS” Tsanaktsidis Company. The latter had been for over 50 years one of the leading companies in Greece during the difficult period of Greek development and was specialized in machinery and spare parts sale, their construction and transformation of vehicles, carriers, tanks, cranes, etc. Great importance was given in high-pressure hydraulic systems. In fact, K. TSANAKTSIDIS BROS Co not only performs its activities in hydraulics’ trade but also is the certified distributor of PARKER HYDRAULICS (VOLVO, DENISON, ERMETTO) and dealer of REXROTH (HYDROMATIK, BOSCH).

However, the company after its establishment was not limited to hydraulic systems trade, but extended its activities in other fields as well, such as recycling and in particular metal (scrap) recycling machinery. Costumers’ response was direct and now the company is placed among the top Greek companies specialized in recycling machinery trade. The company, for which integrity, honesty, quality and not irresponsible sale of unknown machinery are important values, has gained –reasonably- the respect and the trust of its costumers but also of its providers. It is remarkable that it is the only recycling machinery Company in Greece which has:

Leave your e-mail, and stay informed about new products and promotions.